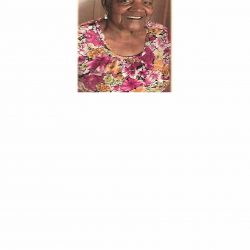 Erma Victoria Crocket (formerly) Tate was born in Coldwater, Mississippi on January 26, 1934, to William and Stella Tate. She was the sixth of thirteen children. Her parents provided a loving and spiritual environment which led to her accepting Christ at an early age and submitting to baptism under the pastoral leadership of Elder Nichols. Erma completed her formative schooling and graduated from Scipio E. Jones High School, North Little Rock, Arkansas in 1953.

Shortly thereafter, Erma was joined in holy matrimony to Isaac I. Crockett in October 1954. To this union seven children were born. In the early years of marriage, they lived with their three eldest children in North Little Rock, Arkansas. Soon, they relocated to Southern California where their four younger children were born. The family eventually moved to Carson, California where they lived for twenty-five years. Erma was known in her neighborhood for her exceptional cooking skills and was an accomplished, highly sought-after seamstress. Erma exemplified being a good “neighbor” and was a “mom” to many.

In 1989, Erma, her husband and two sons, relocated to Helena, Arkansas. Once settled in Lexa, Arkansas, she began gardening and learned to can fruits and vegetables. She also began quilting. Her jams, stewed tomatoes, pickles and custom quilts were joyfully welcomed by family, neighbors, and friends.

In September 1998, at the tender age of 64, Erma decided she would enter the workforce. She was hired at Tunica Nursing Home. She spent most of her years there as Activities Director until her retirement in July 2014. Erma’s supervisor states that, “Erma was the best Activity Director that I had the chance to work with. She always had the residents at heart.” Upon retirement, Erma traveled frequently and spent time with family. She lived and enjoyed life to the fullest. She embodied what it truly meant to exemplify the character of Christ.