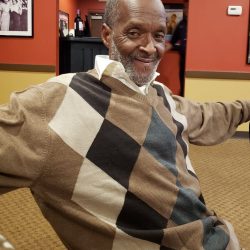 Alaric Thurman Dolphin, Sr. was born September 4, 1957 in Helena, Arkansas to the late James Leroy Dolphin, Sr. and Viola Jones McGlaun. He fought a good fight and completed his course in the comforts of his home, June 29, 2021 surrounded by his loving wife and family in St. Louis Missouri.

Alaric was a graduate of C.V. White High School Class of 1975. He continued his education at the Henry Ford Community College, Dearborn, Michigan where he majored in Automotive Technology. He completed one year of school while working various jobs throughout the Detroit, Michigan area.

In 1978, Alaric enlisted in the United States Marine Corps where he served as a Military Police Officer. While at Marine Corps Base Camp Lejeune, North Carolina he faithfully served this nation and made an honorable decision to reenlist. Continuing with his military career, in 1983 he received orders to Honolulu, Hawaii where he remained for the next two years. After completing his military commitment he was employed at Telos Construction Company, Honolulu, Hawaii until his relocation back to Arkansas in 1994.

September 4, 1997, he was united in Holy Matrimony to his best friend, partner, teammate, comforter all in one in; Charis Hood Dolphin. This union remained loving, faithful, and devoted for twenty-four years. Although no children were born to this union, but it blended a loving and nurturing family unit.

Alaric affectionately known as “Dog” and “Bigger Figure,” was a prime example of what a husband, father, and grandfather should be. He was a hard worker, making sure his family was taken care of. He was a humble, well-mannered yet kind spirited man that everyone that he came in contact with enjoyed his presence.

In 2017, Alaric relocated with his family to St. Louis, Missouri. There he was employed at Anheuser Busch Corporation until his health decline.