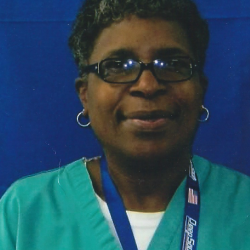 Terry Harris Jones was born January 21, 1955 to the late Andrew Will and Hilda Harris in Jonestown Mississippi. She entered eternal rest September 7, 2019 at her home.

Terry accepted Christ as her personal Savior at an early age. She later joined Greater First Baptist under the leadership of Reverend Arthur Hughes, Jr. where she remained faithful until her demise.

After receiving her credentials as a Registered Nurse, she worked in various hospitals and positions within the nursing industry.

Terry was united in Holy Matrimony to Alphonso Jones, Sr. in 1988. To this union no children were born but their unity blended a family of three children; Saundra, Roscoe, Sr., and Alphonso, Jr.

Terry was a health fanatic and exercise enthusiast. She was an avid reader and puzzle solver. She was a private person but enjoyed spending time with her family.

Terry is preceded in death by her parents, Andrew and Hilda Harris.