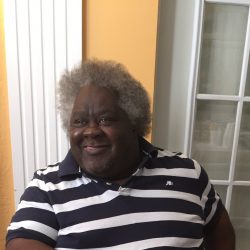 Mr. James “Jimmy” Getter, age 59, of Little Rock, AR, died Monday, April. 8, 2019, at Arkansas Health Center.
He was born March 3, 1960, the son of Ulysses and Atlen Getter who proceeded him in death. He is survived by his daughter, Tabitha Parks and husband, Gary and five grandkids, of Little Rock, AR, and three brothers, Robert Fire and Dorothy, of Helena, AR, and Leonard Getter of Lafayette, IN, and Calvin Getter, of Atlanta, GA and two sisters who proceeded him in death, Georgia and Eula Getter, and three sisters Dorothy Getter-Stokes of Jacksonville, AR, and Cathy Getter-Jacobs and husband, Nathaniel of Lexa, AR, and Pat Getter-Turner of Maumelle, AR.