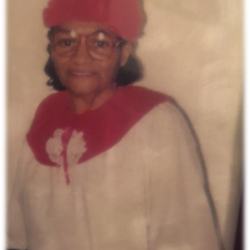 Margaret Alice Sims Rutledge was born in Marvell, AR March 2, 1934 to the parents of Sammie and Mary L. Sims. Over the years she was known to her family simply as Gran. At the age of 16 she married her high school sweetheart Floydzell Key, Sr. conceiving Floydzell Key, Jr., Mary Joyce Key, and Calvin Emmanuel Key. Two years later she married the love of her life Jesse Rutledge and he raised her three children, and later had Connie Sue Rutledge.

Margaret Rutledge was Saved, Sanctified, and Holy Ghost filled at the age of twenty-one.

Over the years Pastor Rutledge worked as a field worker in the Evangelistic Department in the North Little Rock COGIC District.

Pastor Margaret Rutledge has been running a race for Jesus ever since she gave her life to Christ. For many years she traveled back and forth across the state of Arkansas, Mississippi, and the surrounding areas preaching the gospel and singing praises to the Lord. She and her husband and youngest child traveled singing and preaching to the masses. She is most known for singing “This Train.”