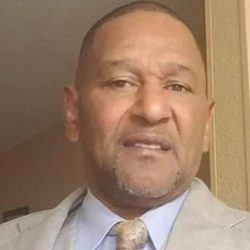 Curtis Calvin Frierson was born on June 27, 1963 in Poplar Grove, Arkansas, to his parents Edward Frierson and Alberts Barrow-Frierson. He departed this life at the age of 58 on Tuesday, August 31, 2021 at 4:21 a.m. at Washington Regional Medical Center in Fayetteville, AR.

Early in his journey, he accepted Jesus Christ as his Lord and Savior at an early age. He was an active member of St. James Baptist Church until God called him home.

As his journey continued, he met Andrea Larry – Frierson on December 27, 2016. They would later become united in Holy Matrimony on February 28, 2021.

Curtis received his early formal education in the West Helena School System, graduating from Central High School in 1982. He then continued his education at the Ouachita Job Corps Center in Royal, AR, graduating with a certificate in concrete finishing in 1984.

The number one thing Curtis liked to do was talk on the phone with family and friends. Keeping his vehicles spotless was a must for him, as well as barbecuing, cooking, and lending a helping hand no matter what it was. He also served many roles throughout his life including a supervisor (Packing Sanitation Services, Inc.), truck driver (Argos Concrete Company), dock leader (Arkansas Best Freight), and residential social service assistant (Job Corps). He later decided to step out on faith to pursue his true passion, which was lawn care and landscaping, by opening his own business, Frierson’s Landscaping and Lawn Service.

He was a devoted family man to all of his family, including his wife, children, brothers, sisters, grandchildren, and the rest of his family.

Preceding him in death were his parents; Edward and Alberta Frierson, one sister; Delois “Moon” Frierson, one nephew; Malik Issah and one great niece; Mabyya Issah.