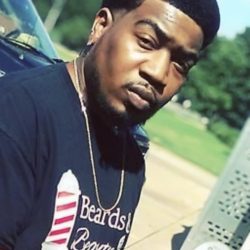 Mykel James Williams was born March 28, 1984, in Marvell, Arkansas to Carla Martin and Kalvin Spears. He gained his wings July 1, 2021, in the comforts of his home.

Affectionately known as “Stuffy,” he confessed his faith in Christ at an early age. He was a member of Mount Zion Missionary Baptist Church, Turner Arkansas under the leadership of Reverend W.R. Parks.

Stuffy attended Marvell Junior High School, Marvell Arkansas and completed his formal education in the Helena – West Helena School District, Helena Arkansas. He was a proud graduating member of Central High School Class of 2002. He went on to receive a degree from Phillips County Community College annex of University of Arkansas, Helena Arkansas with an Associates of Computer Information Services.

Stuffy later was employed at Isle of Capri, Lula Mississippi as a Security Guard. He also was employed with Soybean Farms, Incorporated until his health began to decline in 2018.

Stuffy was a lovable, fun person who was an inspiration. He had a special passion for children that others often admired. He was praised for generating such love, time, and consideration for the little ones. He enjoyed listening to music of all genres and playing dominos.

Stuffy was a “Father” to Mykelah Semaj Williams. Often referred to as “Fatt,” she was the love of her dad’s life.

Stuffy is preceded in death by his grandparents; James and Ella Mae Williams.