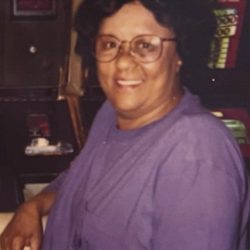 Dorothy Dean Austin Glass was born December 2, 1939 in Helena, Arkansas. Her parents were Bernard Austin and Pearl Brooks, both of whom preceded her in death. She was united with Christ and baptized at an early age. She was a dedicated member of First Baptist Church Midland Heights for several years. Dorothy was an active member of First Saint Paul Missionary Baptist Church under the leadership of Reverend Billy Ward, where she served as a faithful member until her death.

Dorothy was educated in the Helena Public Schools. She was a 1958 graduate of the historic Eliza Miller High School. Up until her passing, she played an active role within her class. Whether it was assisting in planning class reunions or keeping in contact with classmates, she was always around to lend a hand.

She was a wonderful wife to Edward Glass for 54 years. They were united in marriage on March 16, 1960 and were the proud parents of five children. Some of their most cherished memories were family trips.

Dorothy was employed at Helena Crossing Elementary School for several years before taking a job at Merchants and Farmers Bank. She was employed with Doughboy Industries until retirement.

In addition to her parents, Dorothy was preceded in death by her husband, Edward L. Glass and her son, Edward Peter Glass.