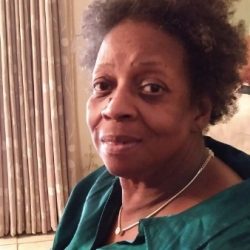 Genoria Williams Mosby was born July 30, 1947 in Helena, Arkansas to the late Lucille King and Jimmie Williams. She was the oldest girl of nine siblings.

Genoria Mosby transitioned from this earthly life into her new home in glory on May 5, 2021.

Genoria was baptized at an early age at Frist Baptist Church, Lake View, Arkansas. She was an active member until she graduated and moved to Little Rock, Arkansas. She later attended Greater Friendship Baptist Church during her stay in Little Rock. After moving to West Helena, Arkansas, she attended the Church of the Living God PGOT in Elaine, Arkansas until her death.

Genoria was preceded in death by her parents; her husband; Freddy Mosby, Sr., a daughter; Gwendolyn Mosby Carroll, and a son; Keith Mosby.