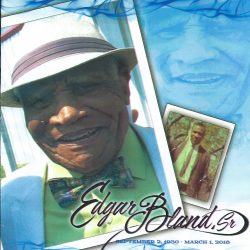 Edgar Bland, Sr., fondly known to friends and family as “Bland,” was born September 2, 1930 in Sledge, Mississippi.  Born and raised in Sledge, he attended and graduated from Coahoma Agricultural High School and Coahoma Junior College.  There, he met and fell in love with his wife of 62 years, Etta Jescena Bland.

He served his country as a Marine in the Korean War.  After receiving an honorable discharge, he continued his education and received a Bachelor of Science in Education Degree from Rust College.

For 35 years, he enriched the lives of many students teaching High School English.  He retired from Helena-West Helena School District, but remained as life-long educator.

A gentle man, Bland was well-known in the community for his dedication as a alcoholic counselor for Mid-Delta Community Services.  As a counselor, he exercised his passion and willingness to help anyone who sought sobriety. He also proudly served as a deacon and was founding member of Manasseh Christian Fellowship Church.