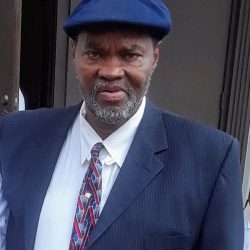 Visitation will be held Friday, June 19, 2020 at New Mt. Pisgah Missionary Baptist Church, Crawfordsville, Arkansas from 6:00 p.m. to 8:00 p.m. Graveside service will be held Saturday, June 20, 2020 at Paradise Garden Cemetery, Edmondson Arkansas at 9:00 a.m. Due to our Federal and State COVID-19 guidelines: during the Visitation - we will only allow individuals to view 10 at a time, at the Graveside Service - we will abide by the social distance standard of 6ft apart. Mr. Harris's service may be viewed live via ZOOM. Here's the information to access the link: Topic: Graveside Service for Mr. James Harris Paradise Garden Cemetery Edmondson, AR Time: Jun 20, 2020 09:00 AM Central Time (US and Canada) Join Zoom Meeting https://zoom.us/j/97547796281?pwd=UllwOTZZN1F1SUUvT1VEbEtUdEtuUT09 Meeting ID: 975 4779 6281 Password: 392206

James Lee Harris was born July 4, 1955 to the late Willie C. and Ruthie Lee Harris, Sr. in Crittenden County, Arkansas. He departed this earthly life and received his Heavenly reward the 8th day of June, 2020.

James accepted Christ as his personal Savior and was baptized at an early age at Mount Zion Baptist Church, Clarkedale Arkansas under the leadership of Reverend G. H. Conway. He later continued his Christian journey under the leadership of Reverend Eugene Farley at New Mt. Pisgah Missionary Baptist Church, Crawfordsville, Arkansas. After relocating to Jonesboro, Arkansas he united with another church home; remaining faithful until his health began to decline.

James was a diligent worker. For ten plus years he worked at Hackney Incorporated, West Memphis Arkansas. One of his proudest accomplishments was becoming a licensed electrician. This afforded him the opportunity to help lay the foundation of the historical Benjamin Hooks Library located in Memphis, Tennessee. Throughout his life, James held various jobs up until his retirement.